It really blew me away. Artistically, it's one of the most astounding games I've played. The use of vector graphics only was a great decision. It also helped that the lighting was quite expressive. Obviously live theater was a major influence on the game - not just the narrative structure of five acts or the dialogue (which reads like a script) but the staging of each scene - they felt like various banks of lights being switched on and off, or setpieces rolling in or out. (I think the layering of the sets helped with this...for instance, zooming into the farmhouse in Act I.) And The Entertainment added a metafictional spin to this as well.

I was also touched by the characterizations. The fact that your dialogue tree options don't really affect the game, but people's reactions to events gives it a unique feel - like you're crafting your character's psyche, rather than the events. It gives it an intimacy that is rare in games. 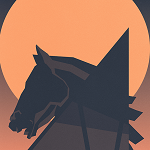 I haven't played it yet, but it sounds intriguing!