Inspired by the thread about "it gets better" platitudes and my suggestion that some of them simply don't get depression enough to say anything useful, I thought it might be a good idea to list some...resources, for lack of a better word, of things that might help someone who's trying to understand to really grok it. I'm thinking more story-type things and personal accounts than anything clinical, but it could be a good metaphor, a compelling image, whatever expresses it in a way that you recognize (if you've experienced depression) or that has helped you understand it better if you haven't (or that you think could if you'd encountered it at the right time).

-Obviously, that http://hyperboleandahalf.blogspot.ca/2013/05/depression-part-two.html has to be on there.

-J.K. Rowling has said that the Dementors in Harry Potter were inspired by depression, and Harry Potter is a series that speaks to a lot of people, so that's a metaphor that might reach some people.

I remember reading this on the old forums. Very funny yet poignant.

This one might only help me because I do have depression/anxiety so it's more about me remembering how it feels (when it's a friend instead of me) than explaining it. But I have always liked Boggle. Also I know the title is anxiety; but it's always hit me as applying to depression, too. 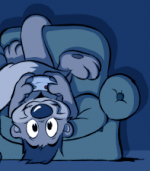 @SarahGryph: Aw, that comic's really sweet. I think I can relate somewhat, especially with how isolating it can be when you think you're some kind of untouchable.

I don't know if this video is appropriate for this thread. I just really like it and I thought I'd share. It's called 'The Power of Empathy' by RSA shorts: https://www.youtube.com/watch?v=1Evwgu369Jw

<mod>I've split the discussion about depression/anxiety within relationships and Conreezy's wife to a new thread here.</mod>