There are probably not many other people on here with more than a few gray hairs, but it is something I have been thinking about lately because I am at that age. Right now (because I am blonde) you can not really see the gray in my hair and I think the gray I have is an awesome silver color. However, I am not really loving the qualities that gray hair signifies. It is not loss of attractiveness that I fear because I never had that in the first place, but more the perception of being vulnerable and frail. It feels like with all gray hair I might check two "prey" boxes: old and female. Which is weird for me to think because my grandmothers had all gray hair and "vulnerable" was not a word I would have used for either of them.

So thoughts:
When you start to gray do you think you will keep it natural?
What does gray hair signify to you?

I've been working on mine for about ten years now; have a nice streak on the right side of my head. I think most people just see it as a reflection or glare or something until they stop to look at it. My hair has been changing color my entire life, so this is just a little more variety.

This is quite relevant to me, as I started going grey super-early and actually have a fairly noticeable streak already. Abstractly, I kind of like it, it seems sort of futuristic and sleek. In the context of the universe, I'm a little less keen, particularly because I'm young enough that it will give the impression of enough older than I actually am that I may come across as belonging to a totally different stage of life and peer group than I do.

I'd never thought I'd be bothered to dye it, I mostly figured I'm just waiting to graduate into wild-haired witchy old lady personality-wise, so I might as well let my hair colour help me along. But given that I'm now more concerned with appearing more put-together - and less vulnerable, which was something I'd never considered about greying - I may be rethinking this. But I am really, really lazy.  I haven't really come to any conclusions yet, so I'll be interested to see where this thread goes.

It's not just you! I started going gray in my teens and had acquired my current silver-with-some-molty-strawberry-blonde shade by the time I was in my mid-twenties. I dye my hair, in part because we don't all gray gracefully but also because I identify fairly strongly as a redhead and my attempts to even take a look at the gray make me feel kind of not myselfish when I look in the mirror. That may also be because I was most of the way to gray before it occurred to me that dying was optional and not mandatory, so I didn't really watch it as it happened.

As for how I perceive it, it depends on the person more than anything else. If I had to think, I'd say it kind of amplifies whatever my impression already was of the person? If someone already comes across as pale, or dramatic-looking, or serious, or eccentric, or distinguished, or friendly, I think it makes me feel it even a bit more. Maybe because a lot of people do dye their hair, so it's eye-catching?

I always thought of (naturalish) hair dyeing as something your grandparents do, along with wearing lots of perfume/cologne, and going to the woman's club/lodge hall every Wednesday.

I have gray streaks somewhere in the middle of my head but my hair's kinda all over the place anyway so it's hard to see. Most of my dad's side of the family got gray hairs pretty early, and one of my uncles had entirely silver hair by 22, so this didn't really come as a surprise. And currently, a lot of people tend to underestimate my age anyway.

I dunno what I'll do if I get more visible gray hairs. Probably keep it though.

I've been going slowly grey at the temples for several years now. It's really noticeable when it's wet. When it's dry, it's not as noticeable because my hair is a light brown, and there's not enough grey to really stand out from it at this point.

Since there's been so little so far, it hadn't really bothered me much. Until this year when I had a baby. Being grey as a new mom really makes me feel too old to be a mom. It makes me sad. I don't personally feel too old, but when I look in the mirror after showering and see the grey, I think "Wow, you think you can handle a new baby? Hahaha."

I may dye it in the future to match my natural hair color when it becomes more noticeable and a larger portion of my hair. Right now, though, I'm not going to bother.

My mom dyes her hair those rather violent shades of red/purple/dark orange favored by Eastern European women of her generation so I am not actually sure when she went gray. My dad (with whom I share my hair color) seemed to go gray all at once but that was probably because I only visited home once or twice a year.

My grandmothers did the Yulia Tymoschenko which I always found very cool with gray hair: 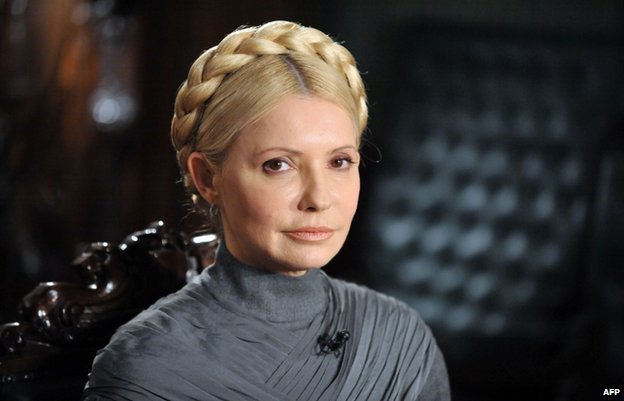 reboot wrote:
When you start to gray do you think you will keep it natural?
What does gray hair signify to you?

So far I've left it. I'm lucky enough that its all concentrated in one spot. If I part my hair on the opposite side from where it does naturally, it parts right on my grey streak. That just makes it look cool instead of like a sign of impending age. If it starts really going, I'll either bleach my hair Targaryan blonde or shave it all off. The latter's also my plan for dealing with a bald spot.

As for where it comes from, I know that one! My mom always used to ask me "you know what this is?"

Yeah, mom. Its a grey hair.

"You know where I got it from?"

No, where'd you get it from?

My hair was originally very red gold -- now it's coming in white and reads as strawberry blonde.

Apart from wanting to always be able to say, "Yes, it's this color naturally," I've seen others shell out mega bucks and be committed timewise for regularly-scheduled coloring appointments -- assuming you can find someone who will give you the results you want.

So in the fullness of time I'll embrace my inner 18th century marquise:)

As long as one is still physically supple, I don't think the silver comes across as prey.  YMMV, of course:)

I acknowledge that going grey means different things for men than it does for women, but...

I'm desperate to go grey. The faster the better. I have genetics on my side - a large part of the men in my extended family went 100% grey by their mid-twenties. I doubt I'll be that lucky.

Grey hair merely signifies a colour I'd rather have. I'm sure it has an affect on how I view others when they have grey hair, but I would consider it negligible at worst. I just like the look of grey hair and would like to have it. I don't really care what other people think about it all that much. It's one of the few things actually in that category for men, actually.